The Naked Raku Workshop was held on Saturday 21st July 2012 at Rossmore Pottery.

Janine Parent is a ceramist from Quebec City, Canada, she specializes in naked-raku and creates forms that strive for simplicity and purity. Her works are patiently and thoroughly polished before raku firing which spontaneously produces an exceptional and random network of fine carbon lines. This process bestows on the pieces their peaceful and harmonious character. Her finely crafted and forceful work includes both decorative art and installation. Her work has been shown in numerous exhibitions in Canada, Europe, and South Korea. Janine Parent received numerous grants and distinctions for the quality of her work.

Janine Parent received the prize for the most promising talent at the Montreal Salon des métiers d’art (artisan show) in 2004 due to her technical mastery of the raku firing process and the maturity of her work.

In 2008 and 2009 she received the Excellence Award at Plein Art Show in Quebec City. 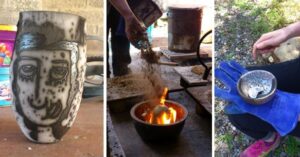